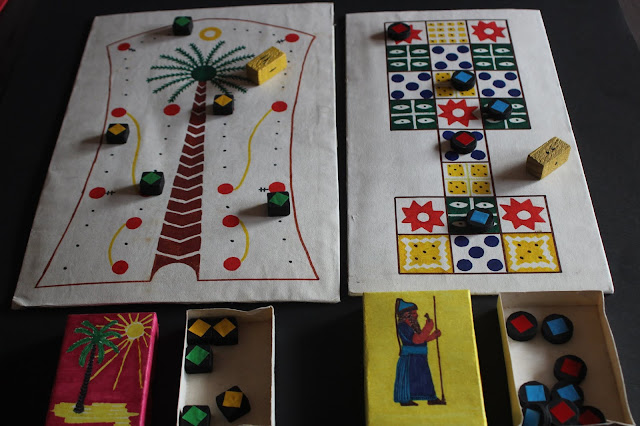 To play and to make games.

It has always run in the family.

Since the era b.c., before Catan.

Where so often the best was to make use of markers and crayons, scissors, glue, and even wooden bits. Not forgetting the typewriter, printing letters in black and red, to give the rules a polished look.

The Game of the King of Ur and the Palm Tree Game, rooted in the history of civilizations, here recreated by my sister, sometime in the 1970's. 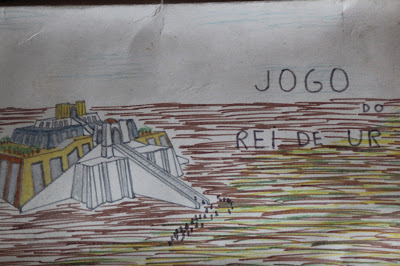 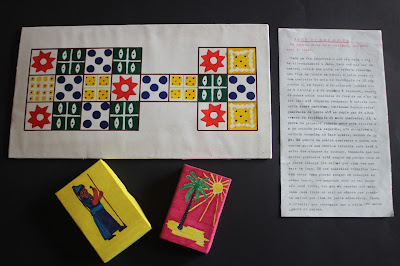 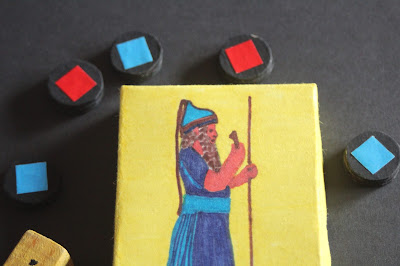 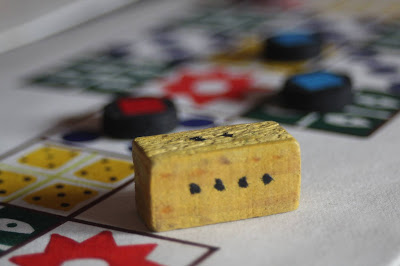 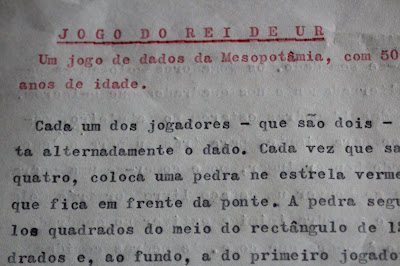 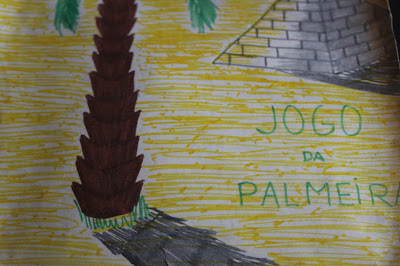 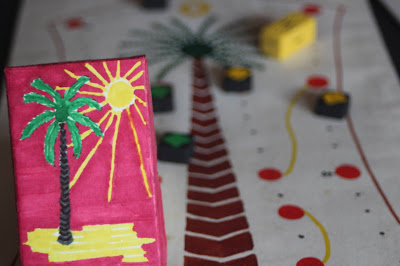 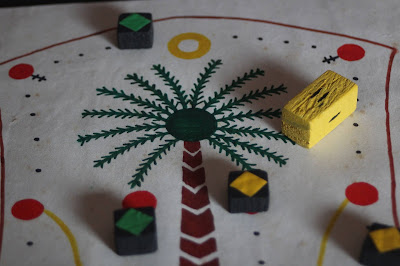 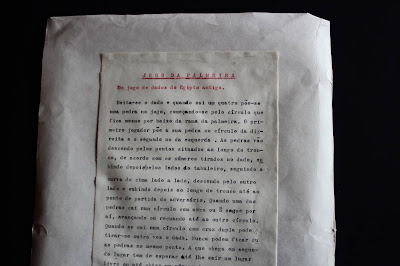 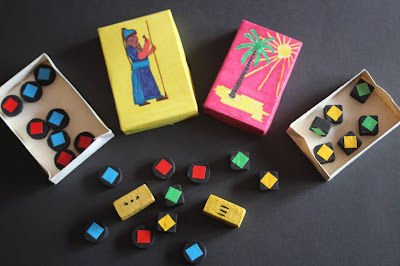 Email ThisBlogThis!Share to TwitterShare to FacebookShare to Pinterest
Labels: Family, Game of the King of Ur, Palm Tree game 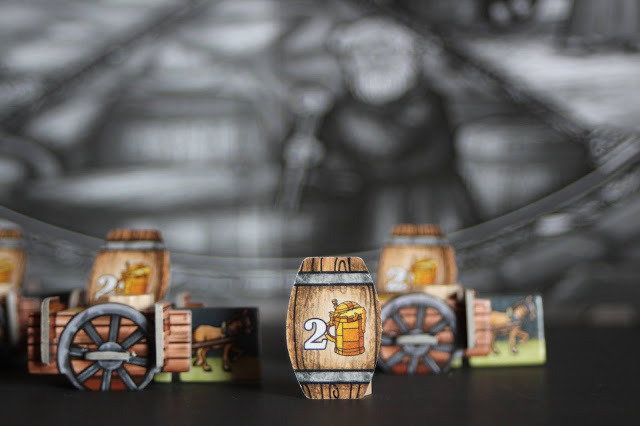 It’s been two years since the creation of this blog. A starting point for a journey with no destination, and with no set direction, with games as route companions. In particular, those I own, some of which have been around for time long enough to be measured in decades, while others are newcomers. Wandering in the land of games.
For a long time, these were mostly worlds to explore and, as they say, (well) spend some time.  In solitary, with family, with friends. By then, I knew nothing about the creators of the said games. Many of the boxes did not even displayed their names. Best known were some publishers, such as Majora and Karto, here in Portugal, or Avalon Hill and JeuxDescartes, abroad.
Much has changed since then, as I have been discovering thanks to the bends and crossroads of this path of mine, and my desire to explore the emerging trails. From the blog, solo project, to occasional translations. From translations to proofreading. From proofreading to the analysis and suggestions regarding game rules still in development. Hence the writing of narrative texts, to enrich the stories beneath. From the rules to play tests, in which processes and balances are put to the test. Always moving upstream in the development process, meeting the creators.
The number of contacts increased quite rapidly. Some of them mere one-offs, others regular ones, some others half-way in between, undefined, waiting for this story to unfold. Those collaborations that stem from the mere will to contribute, proper to the hobby spirit, now coexist alongside professional collaborations.
Games now have people behind them, and at their forefront. So many people, with their own history, projects, dreams, challenges, anxieties, difficulties, with similar or radically different paths. People.
To list them all is a risky business, because I may forget some ... Not least, since they have grown in numbers! But it is a risk worth taking! And so, follow a list of people and companies with whom I collaborated, or have been collaborating, in one way or another.
David Mendes - Pythagoras Games            José Antonio Garrido - MasQueOca
Gil d'Orey - MEBO Games                Orlando Sá
Mateusz Kupilas              Francisco Álamo - Maldito Games
Paul Grogan - Gaming Rules                      Colin Webster                     Pablo Garaizar
Martin Zeeb - Board Game Circus              Janice Turner - Wren Games
Chris Anderson - The BoardGame Workshop                     André Santos
Pedro Kerouac             Petr Vojtěch - Time Slug Studio           Shayan  Sharks
David Liu - Moaideas Game Design                  Joel Bodkin                     David Digby
Andrew Bosley - Witts End               Przemek Dołęgowski - Lucky Duck Games
Caezar Al-Jassar - Alley Cat Games                 Matteo Gravina - 3 EMME
Eric Francis              João Quintela Martins - Art and Games         Pedro Silva
Fabian Fischer - Crimson Company            Jeff Beck - Uproarious Games
Dawson Cowals - Cohort VIII Games             Lukus Adam                     Robert Elliott
Jonathan Gilmour - Pandasaurus Games            Steffen Rühl - Funtails
Scott James - Minerva Tabletop Games           Jordi SamRod - 2Tomatoes
Carla Kopp - Weird Giraffe Games                   Robert @StartPlayer
Wonmin Lee - Pegasus Games                Gottani

At the same time, the participation in events were also increasing, joining scores of people around game tables, now shared with both acquaintances and strangers, players and designers, editors and organizers.

Then ..., well ..., then the pandemic arrived, with the ensuing trail of cancellations. The meetings were suspended, postponed, rescheduled; some reopened, just to close again. The games returning to more confined circles.
Well, not entirely. Some have been dematerialized, migrating to the now common digital platforms, or to the new ways of playing at a distance, where regular mail has long been replaced by video or chat systems.
It is true that it is not quite the same thing, not having the same proximity nor the relationship with the game as a physical object. But it is also true that it not only makes it possible to continue playing at a larger scale, but also allows encounters that would not otherwise be possible.
And that is how I participated in my first virtual convention, Virtual Gridcon, organized by Paul Grogan.

It's been two years since I headed for the land of games.
The game collection continued to grow.
Another thirty or so worlds.
With people behind them.

Games in Black and White

Wandering in the land of games. Unplugged. Fuelled by passion. Moving across time and space. Over boards and tables. In the company of tokens, dices and cards, of all shapes and sizes. Pathways with history and with stories. For sharing. Miguel Conceição

In Black and White

Send me a message